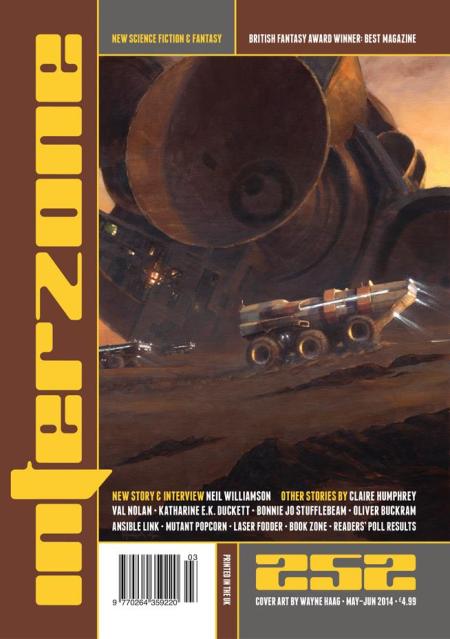 The current issue of Interzone sees Andy Hedgecock interviewing Neil Williamson and reviewing his novel, The Moon King. There’s a story from Neil elsewhere in the magazine.

The Book Zone also has reviews of:

The Three by Sarah Lotz (reviewed by Simon Marshall-Jones)

The Boy with the Porcelain Blade by Den Patrick (reviewed by Matthew S. Dent)

Europe in Autumn by Dave Hutchinson (reviewed by Barbara Melville)

You can order a copy here (or even just browse some more of the contents) and follow its adventures here. Unusually, we’ve decided to put this issue’s editorial online. It’s important.

Regular readers will have noticed a l-o-o-o-ng gap between posts here. I have been unbelievably busy — although, unfortunately, not with stuff that will turn into prose. Life, eh? Can’t live with it, can’t live without it.

A Mad Man With A Blog 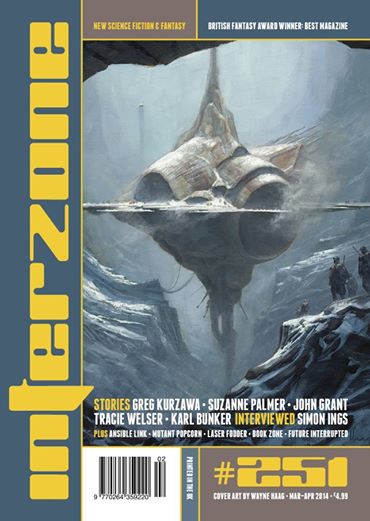 Interzone 251 has been around for a wee while now. And so has my stinking dose of the cold. You can order Interzone directly from TTA Press or you can buy it from the usual suspects. You can pick up this cold pretty easily as well.

In this issue’s Book Zone we have Paul Kincaid reviewing and interviewing Simon Ings about Wolves and other things, and we also have the latest Future Interrupted column from Jonathan McCalmont. Other books reviewed are:

The Gospel of Loki by Joanne M. Harris (reviewed by Maureen Kincaid Speller)

Empress of the Sun by Ian McDonald (reviewed by Duncan Lunan)

The Arrows of Time by Greg Egan (reviewed by John Howard)

Beyond the Rift by Peter Watts (reviewed by Jo L. Walton)

The Copper Promise by Jen Williams (reviewed by Jack Deighton)

You can follow discussion about this issue on the TTA boards where it has its own dedicated thread.

I’m going to go and drink another Lemsip now.

D.F. Lewis is conducting a real-time review of Interzone 251.

This is a seriously well-stocked bookshop and I’d strongly advise you to check it out here.

Ray Cluly interviews Ben Baldwin about his artwork for Interzone amongst other things.

Interzone 249 is available as a wide variety of ebooks through Smashwords and Weightless.

A Clarkesworld podcast of Aliette de Bodard’s story from Interzone 241.

Interzone 249 is avaible for the Kindle.

Locus‘s top SF and Fantasy choices from last year can be found here.